I am proud to announce that I will have one artwork included in this juried exhibition which opens February 1 and runs through the month at the Collective Visions Gallery in Bremerton. There are 130 artworks which were juried by Gary Faigin, Artistic Director of Gage Academy in Seattle. These were chosen from over 800 works submitted by residents of Washington State. My piece is called “Still Life or Landscape.”

I have been invited by the City of Edmonds to display my colored pencil artwork there for the month of February. I will have 16 pieces there. Edmonds is always special to me since I grew up there and graduated from Edmonds High.

I will have 5 mixed media artworks at Semantics during February. These are quite different from my color 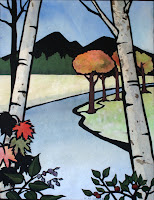 ed pencil work. They start with a piece of black paper. Some of the paper is cut away, watercolored rice paper and other papers are added and on some of them colored pencil is layered over the top.


Now I need to get busy creating more for other upcoming shows to be announced later.
Posted by Kay M. Dewar at 8:57 AM 1 comment: